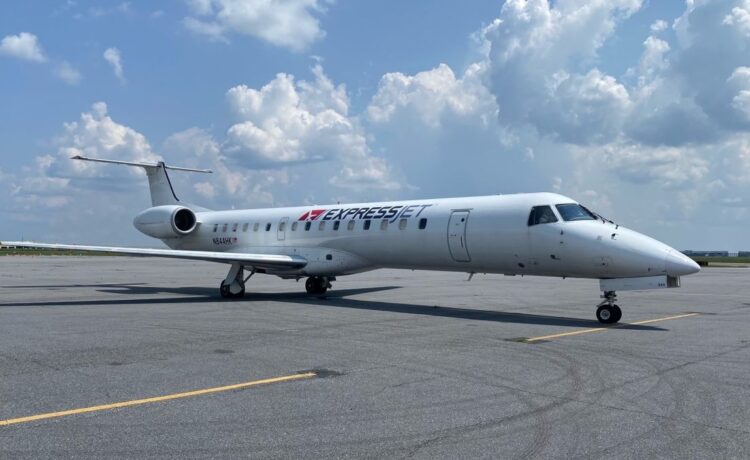 Pilots are in high demand lately — such high demand, in fact, that pilots from the recently defunct ExpressJet Airlines are finding themselves with new job offers, without so much as an interview, days after their employer declared bankruptcy.

Piedmont Airlines, a regional airline based in Maryland and subsidiary of American Airlines, announced Thursday that it would offer ExpressJet pilots conditional job offers based on seniority. The offer is based off of language in Piedmont’s pilot contract, negotiated in 2021 with the largest pilot union in the world, the Airline Pilots Association, that allows for the company to offer a “safe haven for employment” for pilots at “distressed” carriers, according to the company.
The offer isn’t just coming from Piedmont Airlines, either. American Airlines subsidiary Envoy Air “has the same provisions and we are offering ExpressJet/Aha pilots conditional job offers with no interview,” according to Ric Wilson, Vice President of Flight Operations from Envoy Air.
Atlanta-based ExpressJet operated over 450 aircraft at its peak, but pandemic-induced woes proved a fatal blow for the regional carrier. The airline, which calls itself a “reboot” of the company formerly flying as Delta Connection and United Express, filed for Chapter 11 bankruptcy Monday in Delaware and ceased operations, according to the company website. It pointed to stifled growth, rising costs and lower revenue due to the pandemic.
“No one wants to see an airline fail, ever. We know that ExpressJet pilots are well-trained aviators who know the Embraer 145 [aircraft], and we are very pleased to make this transition as easy as possible for them,” said Matt Kernan, Piedmont’s Director of Operations, in a press release Thursday. “This is an opportunity to get these pilots significant pay and bonus increases, expedited job offers and in the process, help Piedmont grow its fleet.”
The effort to snap up experienced pilots from the downtrodden company comes as Piedmont looks to expand its business and compete in an aviation sector with a thirst for pilots. Despite efforts by airlines to hire more pilots, the US pilot shortage is still forecast to get worse. And that will especially be true for the regional airlines like Piedmont serving smaller cities on behalf of the major carriers, like American Airlines. It is mainly those pilots who are being hired away to fly the larger jets.
Enter your email to subscribe to the CNN Business Newsletter.
close dialog
Based on data from consulting firm Oliver Wyman’s fleet forecast and models for industry growth, there is expected to be shortage of almost 30,000 pilots in North America by 2032 if the industry fails to address its staffing problems. That’s almost four times higher than this year’s anticipated gap of 8,000 pilots, which has already proven to be problematic.
This shortage is hitting regional airlines like Piedmont especially hard. According to the Regional Airline Association (RAA), two dozen markets served by regional airports have lost half of their service in the last three years — and that doesn’t include the rounds of cuts planned for later this year. Another 42 markets have lost between one third and half of service in that time frame.
Behind the pilot shortage is a confluence of trends, including the retirement of aging Baby Boomers and significantly fewer job candidates coming from the military, as the use of unmanned drones steadily increased and there were fewer deployments. Covid-19 exacerbated the shortfall, with airlines offering pilots early retirement at the height of the pandemic. When travel demand surged in 2021, the pilot shortfall was so dramatic that it hampered the airlines’ ability to ramp back up, leading to flight delays and cancellations.
“Communities were losing air service for the better part of the last decade,” said Faye Malarkey Black, CEO of the RAA. “You don’t have to lose all your service to lose connectivity to the system. When you lose much of your frequency, businesses won’t want to locate in a place.”
Read form: https://edition.cnn.com/2022/08/26/tech/piedmont-pilots-job-offer/index.html
Share on FacebookShare on Twitter
Malmo Express NewsAugust 26, 2022