South Korea PM urges calm after Covid cases soar by 70,000 in a day 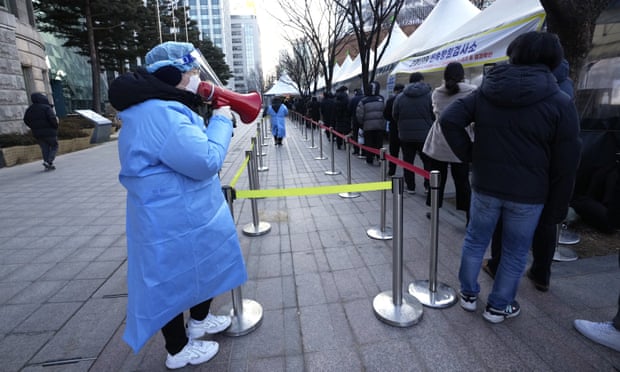 South Korea’s prime minister has called for calm after a record number of Covid-19 cases, amid warnings that the latest surge had yet to peak.

Kim Boo-kyum said serious cases and deaths were still at “manageable levels”, after health authorities reported 171,452 new infections on Wednesday, a sharp increase from the 99,573 cases a day earlier and the previous all-time high of 109,831.

“Although our awareness and implementation of anti-Covid rules should not be loosened, there is no reason at all to fear or panic about the numbers of new cases as in the past,” Kim, said, according to a transcript of a pandemic response meeting.

His comments came after the Korean Disease Control and Prevention Agency (KDCA) cited data showing that people infected with the highly transmissible Omicron variant were almost 75% less likely to become seriously ill or die than those who contracted the Delta variant.

About 56% of the 1,073 people who died over a recent five-week period were either unvaccinated or had received only one dose, a KDCA study showed, with people aged 60 or older accounting for 94% of deaths.

More than 86% of South Korea’s 52 million people have been double vaccinated and nearly 60% have received a booster shot.

On Wednesday, the government approved Pfizer vaccinations vaccine for children aged five to 11.

With 2.3 million cases and about 7,600 deaths since the start of the pandemic, South Korea has fared better than many comparable countries, but the recent dramatic rise in infections is at odds with global trends.

On Tuesday, the World Health Organization (WHO) said the number of new Covid-19 cases around the world had fallen 21% over the past week – the third straight week of decline – but added that infections were still rising in the western Pacific region. South Korea was one of five countries with the highest number of new infections, the WHO said.

Experts have predicted that the latest wave could peak at as many as 270,000 infections a day by early next month, around the time South Koreans elect a new president.

The administration of Moon Jae-in, whose single five-year term is about to end – has been criticised for relaxing targeted social distancing measures last week.

It partially eased restrictions by extending curfews for cafes and restaurants by one hour to 10 pm, although it left the six-people cap on private gatherings and other measures, including mask mandates in public spaces, unchanged.

Newspaper editorials reflected concern about the steep rise in the number of people who are being asked to recuperate at home to relieve pressure on the country’s health services.

The Korea JoongAng Daily said deaths and serious cases could rise if more than half a million people recovering at home were “neglected”. “Home treatment can hardly be described as treatment, because most patients must endure it without any prescription medicine,” it said.

Kim said remaining social distancing rules would not be relaxed until cases had peaked. “Omicron’s spread is still racing to its peak, but once it is assured that severe cases and deaths can be stably managed, we will reform the broad framework of our anti-virus quarantine policy including social distancing,” he said.