EU poised to announce wide-ranging sanctions against Russia over Ukraine 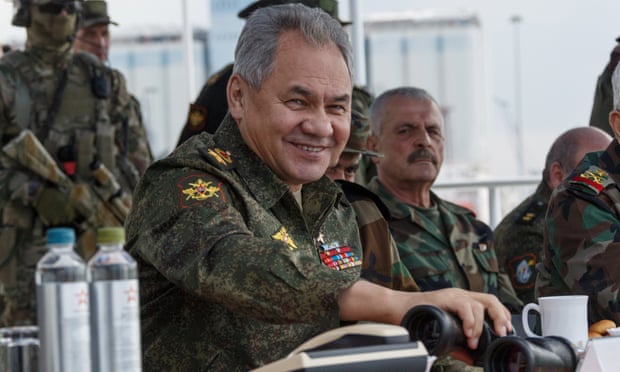 Russia’s defence minister, Sergei Shoigu, the commanders-in-chief of the Russian air force and Black Sea fleet, leading state “propagandists” and 351 Duma deputies are expected to be targeted in EU sanctions announced on Wednesday.

The measures, which have to be signed off by EU foreign ministers, would go further than those announced by the US and a significant distance beyond Boris Johnson’s Russia sanctions.

If approved, the EU will impose asset freezes and travel bans on 23 people, three banks and a notorious internet “troll factory” in St Petersburg, in response to the Russian president, Vladimir Putin’s decision to recognise the self-proclaimed republics in Donetsk and Luhansk as independent states. The bloc is also expected to sanction 351 members of the Russian state Duma that voted for recognition of the two territories.

The Russian government will also be further restricted in its ability to raise money on EU financial markets. EU officials are drawing up measures to ban trade with the two Russian-controlled territories in eastern Ukraine, mirroring earlier sanctions on Crimea in 2014.

“Everyone seems onboard for the adoption of sanctions,” an EU diplomat said. EU capitals have a few hours to send comments, with ministers expected to approve the sanctions at 3pm CET.

At the top of the sanctions list is Shoigu, because he is “ultimately responsible for any military action against Ukraine”, states the draft list seen by the Guardian. He is joined by Anton Vaino, Putin’s chief of staff, who “plays an active role in decision making”, as well as Igor Osipov, the commander-in-chief of the Black Sea fleet, and Sergei Surovikin, commander-in-chief of Russian aerospace forces.

Other top officials include the deputy prime minister and chair of state-owned VTB bank, Dmitry Grigorenko, and Igor Shuvalov, the chair of Russia’s state development bank, VEB, which plays an important role in funding its defence sector.

The EU is also targeting Russian “propagandists”, including the foreign ministry spokesperson, Maria Zakharova and head of the RT channel, Margarita Simonyan, both known for their strident anti-western rhetoric. Vladimir Solovyov, the pro-Kremlin presenter of the Russia One channel, also features.

Other notable figures include Yevgeny Prigozhin, described in US sanctions as the founder and unofficial head of the Wagner mercenary group, which is already subject to EU sanctions for what Brussels calls “responsibility for serious human rights abuses” and extrajudicial killings in Ukraine, Syria, Libya, the Central African Republic and other countries. Prigozhin, known as Putin’s chef, finances the Internet Research Agency, which has also been added to the EU sanctions list. Based in St Petersburg, the IRA is better known as the “troll factory”, where bloggers work around the clock to flood the global internet with pro-Putin and anti-western views.

Prigozhin’s mother and wife, who own companies with links to him, are also on the draft list.

The sanctioned banks are Bank Rossiya, believed by EU and western officials to be the personal bank for Putin and many of his officials, as well as Promsvyazbank and Vnesheconombank, both considered by EU officials to be instructed personally by the Russian president, with a key role in financing Russia’s defence sector.

If the measures are approved, it will be the largest number of people added to the EU’s Russia sanctions, which currently cover 193 people and 48 companies linked to the annexation of Crimea and destabilisation of Ukraine. Many Russian Duma deputies are already subject to EU sanctions.

EU ministers unanimously approved the broad outlines of the package on Monday, after intense discussions about how to deter Putin. A few countries, notably Lithuania, wanted to hit the Kremlin with the strongest possible sanctions immediately; big member states France, Germany and Italy, however, argued for a more gradual approach.

“We want to have the possibility for deterrence so we could respond if there is further action by Russia,” the EU foreign policy chief, Josep Borrell, said following the ministerial meeting on Monday. “We said clearly that there will be new sanctions against Russia. We have an arsenal of possible actions. We didn’t want to do everything at once, because I think we have to monitor events as they occur.”

Sanctions, Borrell said, would cause economic damage, but had their limits. “Sanctions don’t have miraculous effects,” he said. “It’s not like a red light where everybody stops.”

Further talks on sanctions are likely to follow in the coming days. “Expect some more discussions on the broader big bang sanctions package later this week,” said the EU official.