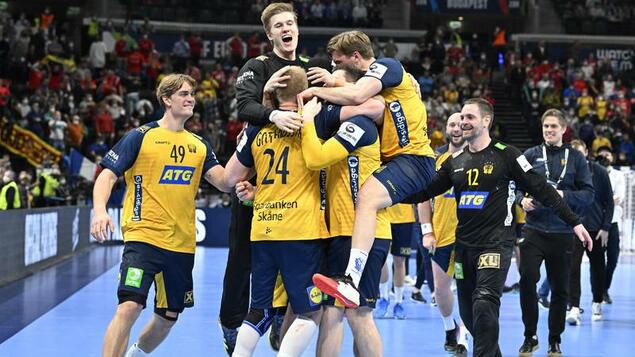 The game was extremely tight, as it is not unusual in a final, and the Spaniards took the lead within the last minute of the first half, thanks to an efficient defense backed by goalkeeper Andreas Palicka, who was elected Player of the Match for his performance.

Spain did manage to lead by two goals for a short time at the start of the second half, but after 17-15, neither team kept an advantage of more than one goal.

The final score was set in the last minutes. The standstill at 26-26 was finally broken by an overtime penalty, called for Ekberg who became the hero for Sweden.

“I cannot describe how I feel now. It really does mean a lot for us and for the whole country as it was our first gold medal in the last 20 years and we lost three finals in the near past so we are absolutely buzzing now,” Swedish right wing Valter Chrintz said after the game.

“Now I cannot say that I am satisfied with the silver medal, but we did a really good tournament. I did not expect that we could reach the final. It is very tough to lose like this. We will have time to think it over and we can say that it was an amazing EHF EURO 2022, but right now it is hard to think that,” Joan Canellas, from the Spanish team, told reporters right after the game.

Denmark returned to the podium after eight years. The feat is even more so historic, that the Danes have never defeated the French at the EHF EURO, in the five times they met on the parquet. Kentin Mahe earned the Player of the Match award, after scoring eight and making seven assists.

“It was a tough and exciting match. We had a tremendous defense and a strong goalkeeper. When Matthias Gidsel went out early, we even fought harder. We fought like crazy in the last 60 minutes of the game. I am so happy with this win and I am very proud of my team,” Denmark coach Nikolaj Jacobsen commented following the victory.

The Men’s EHF EURO 2022, starting on January 13, took place in five venues across Hungary and Slovakia.

A total of 24 teams competed in six groups in the 15th European Championship and 65 matches took place during 18 days.