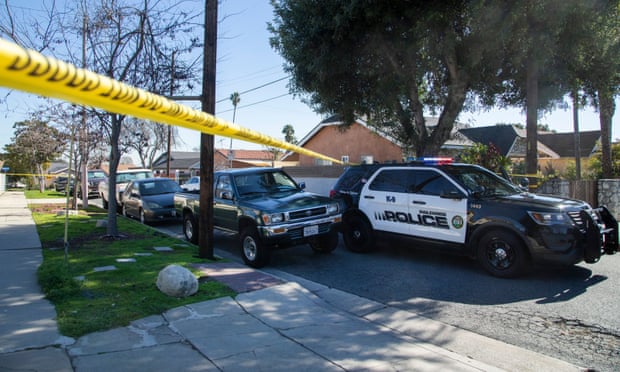 Four people were killed and one was wounded when multiple shooters opened fire at a house party near Los Angeles over the weekend, authorities said.

Police in Inglewood, a historically Black city of about 100,000 near LA, responded to reports of shots fired at a home at about 1.30am on Sunday, the Inglewood mayor, James Butts, told reporters.

Two women and two men were shot and killed and another man was hospitalized in critical condition and expected to survive, CBS2 reported.

Butts said the shooting appeared to have been a targeted “ambush” that involved multiple weapons, including a rifle and a handgun. The mayor described the incident as the worst single shooting crime in Inglewood since the 1990s.

The two men who were killed have been identified in news reports as Teron Whittiker, 21, Jayden Griffin, 21. The two women who were shot and killed are Breahna Stines, 20, and Marneysha Hamilton, 25, two sisters who were celebrating Stines’s birthday that night. The home was reportedly rented through Airbnb.

Sunday’s shooting comes as homicides, mostly with guns, have increased sharply since the onset of the pandemic. Across the US homicides increased by 30% between 2019 and 2020, the largest single-year jump in the 60 years that the FBI has been tracking such data. In California, homicides increased by 30%, with 523 more homicides happening in 2020 than the year prior. Black residents, despite comprising 6% of the California’s population made up 31% of the state’s homicide victims.

The increase in shootings has led to fresh fears about a “violent crime wave” following the start of the pandemic. The dynamics behind the increase continue to be investigated. But, researchers, violence prevention practitioners and law enforcement officials said an array of pandemic-related developments were probably playing a role, including economic distress, the breakdown of social pillars in the community, and slowdowns in the courts.

The surge affected localities big and small in every corner of the country, but killings have not been equally distributed along racial and socioeconomic lines.

While there is no official data yet on 2021 homicides, the increase appears to have held steady, with cities from Oakland to Chicago continuing to see high numbers of killings that affect the cities’ most underserved neighborhoods.

Sunday’s deaths come as Black residents and organizers in Inglewood and south Los Angeles cities including Compton and Watts continue to look for answers in the killing of Tioni Theus, a 16-year-old who was found dead on the 110 Freeway in Los Angeles on 8 January.

Butts, the Inglewood mayor, said the police were looking for multiple people who may have been involved and urged potential suspects to turn themselves in. “We will find you and prosecute you,” he said.