As schools shut across the US, Europe made it a mission to keep them open

But as he announced the new restrictions, Taoiseach (Prime Minister) Micheál Martin emphasized that schools and childcare facilities should stay open. "This is necessary because we cannot and will not allow our children and young people's futures to be another victim of his disease. They need their education," Martin said.There has been a similar story in many European countries including Germany, France and England, which made it their mission to keep in-person learning going, even as they imposed strict measures to combat the second wave of the coronavirus pandemic. In contrast, major cities in the United States, including Detroit, Boston and Philadelphia, are shutting schools and moving classes online in a bid to stave off rising infection rates. 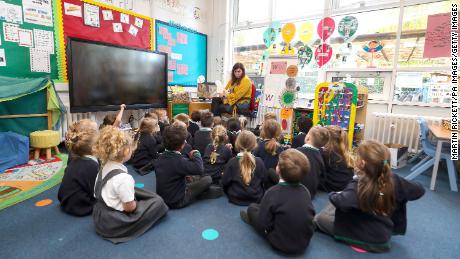 "There are rates of infection at which is too dangerous to keep schools open, and that has happened in a number of places in Europe," Anthony Staines, professor of Health Systems at Dublin City University, told CNN.But he said that the major response should be "effective, highly resourced public health.""Schools do spread this virus, but they're not a major route of spread," he added.Staines said it was appropriate for different places to employ different measures "because their economic situation is different, the spread of the virus is different." Israel, for example, faced major outbreaks linked to schools.School closures "may be part of a response for a period of time" but "with appropriate knowledge, information and understanding, closing schools is not required," he added."European countries have made a choice, I suppose, that trying to keep schools open is very important."

Detroit Public Schools Community District (DPSCD) announced Thursday it was suspending all face-to-face instruction because of the city's rapidly increasing infection rate. Classes will move entirely online, starting Friday until January 11. The DPSCD said the decision was made with the city's health department, after the infection rate neared 5% last week and has been increasing this week. If the rate improves, the district will consider reopening learning centers before January 11, it said in a statement.New York City Mayor Bill de Blasio warned at his Thursday briefing that the city is preparing to shut its schools if the test-positivity rate continues to increase. 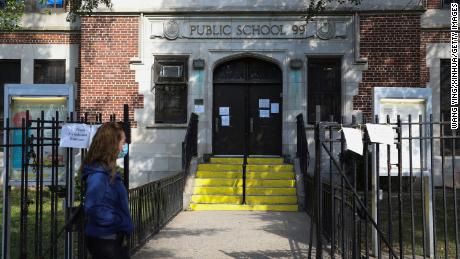 The city is currently seeing a 2.6% test-positivity rate on a seven-day average. De Blasio previously said schools would close if that figure reached 3%. The mayor said that if schools shut, "our hope would be to make it a very brief period of time," adding that despite growth in the positivity rate, there was still time to turn the number around. The School District of Philadelphia announced Tuesday all schools will remain fully virtual until further notice.The city's schools have been using digital learning since September 2 and were supposed to start the transition process to a hybrid model on November 17. Chief of Schools Evelyn Nunez told school leaders in a letter obtained by CNN that remote learning would continue for now, "to help safeguard the health and well-being of our staff, students and families."Boston public schools had begun a phased reopening, with the city's highest-need children returning from October 1. Three weeks later, just as kindergartners were due back, the city returned to remote learning."It was devastating for me to have to close the schools," Boston Mayor Marty Walsh told CNN's Jim Sciutto and Poppy Harlow at the time, citing the city's positivity rate moving from 4.4% to 5.7% in a week as the major factor.Walsh told CNN's Wolf Blitzer on The Situation Room the city felt the number was "a little on the edge there for us to continue to have in-person learning for our high-needs students. It was a really difficult decision."Superintendent Brenda Cassellius said in a statement she was "heartbroken" about closing schools. "Our families are desperate for these services for their children, many of whom are non-verbal and unable to use technology in the home," she said.Des Moines and Iowa City are also closing schools for two weeks.

Not all leaders believe that such a step is necessary, however. France and England entered month-long second national lockdowns on October 28 and November 4 respectively. In both countries, non-essential businesses, restaurants and bars have closed, with residents only allowed to leave home for work, medical reasons, exercise or grocery shopping.One key difference from the spring lockdowns in these two countries is that they have chosen to keep schools open.Amanda Spielman, chief education inspector at UK education watchdog Ofsted, said in a report published this week that the decision to keep schools open during England's second lockdown was "very good news indeed." "The impact of school closures in the summer will be felt for some time to come — and not just in terms of education, but in all the ways they impact on the lives of young people," she said.The Ofsted report, published on Tuesday, found that some children had seriously regressed because of school closures earlier in the year and restricted movement. 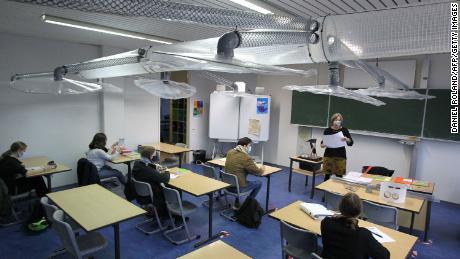 It found that younsters without good support structures had in some cases lost key skills in numeracy, reading and writing. Some had even forgotten how to use a knife and fork, the report said. Some older children had lost physical fitness or were displaying signs of mental distress, with an increase in self-harm and eating disorders, while younger children had lapsed back into using diapers, it found.Some children in Europe, the US and across the world have been missing schooling during the pandemic because of a lack of access to technology — and it's hitting low-income students much harder."In places that have shut schools extensively, there is significant risk of educational interruption," Staines said, adding that "children from poorer and more deprived backgrounds lose more and take a lot longer to recover from what they've lost."He said school also "provides an extensive childminding service," allowing families to participate in the economy. A fall in referrals to social services also raised alarm in the UK that abuse may be going undetected. German Chancellor Angela Merkel acknowledged this risk on October 28 when she announced a partial national lockdown to fight rising infections in the country, saying restaurants and bars would close and people should minimize contacts for four weeks from November 4.Merkel said schools and kindergarten would stay open, with strict hygiene measures, not only as "an educational mission," but because spring had shown "what dramatic social consequences it has when children cannot go to school or the daycare center.""This has a direct impact upon families. To say it clearly: Violent assaults against women and children have increased dramatically," the German leader said.The European Centre for Disease Prevention and Control reported in August that children accounted for fewer than 5% of coronavirus cases in the European Union and UK. It said closures were unlikely to provide significant extra protection for children's health.While they may present a small risk to grandparents, Staines said, "the major risk to grandparents is the older adults in the house."Many European schools have introduced measures like ventilation, mask-wearing and holding classes outside or in small, distanced groups."Both Europe and the United States have made a mess of managing Covid," added Staines. "Lockdowns are not for controlling infections in populations, lockdowns buy you time to bring in public health measures. They buy you time to do contact tracing," he said."Make schools safe by making the rest of society safe. So as the rate of infection falls in the community, the risk of schools falls."