Jönköping’s HV71 gets the gold 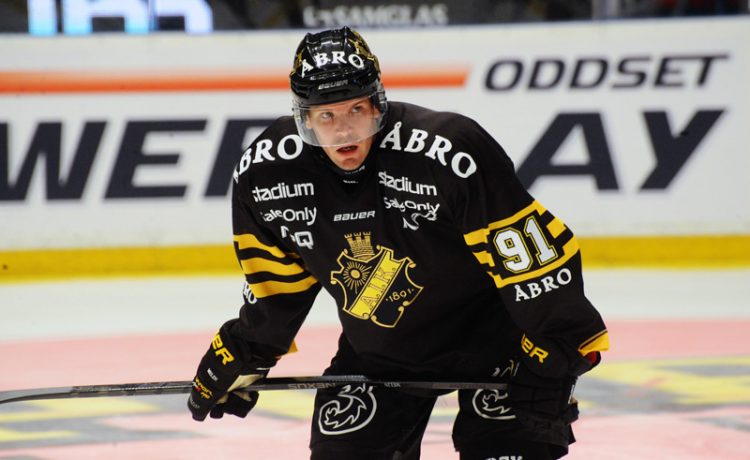 nordstjernan– A couple hometown heroes helped HV71 hoist the Le Mat Trophy as the Blue Bulls topped the Brynäs Tigers 2-1 in overtime April 29 at the Kinnarps Arena in Jönköping to claim the Swedish Hockey League crown in a hard-fought seven-game series.
Simon Önerud and Martin Thörnberg grew up in Jönköping watching HV71 and got their start in hockey playing for the HV71 junior program. Each served as team captain for the Blue Bulls during the playoffs, and partnered up for the game- and title-clinching goal, with Thörnberg setting up Önerud at 11:01 of overtime for the tally.
“It’s crazy, I have no words. This is my hometown, my team, it’s Game 7, overtime, and I get to score the game-winner on home ice. It’s unreal, I can’t believe it’s true,” Önerud said.
For HV71, getting Thörnberg back in the lineup was a huge mental boost, and in the end, it was the determination of the 34-year-old second generation HV71 player, who also won the title with HV71 in 2004, 2008 and 2010, that was the difference in Game 7. Thornberg became the team captain after Chris Abbott, the Bulls’ regular-season captain and leading goalscorer, broke his collarbone during the semifinals. Önerud donned the ‘C’ in Games 5 and 6 of the finals after Thörnberg needed emergency surgery to repair a sports hernia he suffered while blocking a shot.
“Last Tuesday, I couldn’t even stand up,” Thörnberg said.
He stood up in Game 7 as he forced his way to the net in overtime and sent a perfect backhand pass to Önerud who tapped the puck in. The championship clinching goal was the tenth for Önerud in the playoffs. The HV71 forward also earned the Stefan Liv Memorial Trophy as the playoff MVP. Liv, who died in a Yaroslavl plane accident in 2011, was the goaltender on HV71’s championship teams in 2004, 2008 and 2010.
“To win the prize means so much to me not only because it is one of the finest individual prizes you can win but also because it’s named after Stefan who was also at his best when it matters the most,” Önerud said.
The overtime goal capped a series that swayed back and forth. HV71 forced the decisive Game 7 on home ice after taking Game 6 in Gävle with a 5-3 win. The Bulls used a three-goal first period to jump out in front and then held off a furious Brynäs third-period rally to send the series back to Jönköping.

A close series
Brynäs goalie David Rautio stopped the 11 shots he faced in the opening period as the Tigers used a lucky bounce to grab a 1-0 lead. Linus Ölund dug out a puck along the boards behind the HV71 goal and tried to center the puck to Jacob Blomqvist, who was skating through the slot. The puck caromed off Bulls’ defenseman Adam Almqvist and bounced to Blomqvist, who fired a wrist shot past Linus Söderström at 12:55 for a 1-0 Brynäs lead.
It was the only goal either net minder would surrender as the two teams battled for the next two periods without scoring. HV71 got its equalizer at the start of the third period when Christopher Tongren took a pass from Dylan Reese and scored on a near impossible angle from the left face-off circle.
The Bulls came out in overtime and peppered Rautio with shots, outshooting the Tigers 6-4.
“It was a close series but I think our best players were better than theirs and that we deserved to win,” HV71 head coach Johan Lindbom said. “I am especially proud of our young players who had to really step in this series. I am also very happy for Simon. He was the best player throughout the playoffs and he deserves this.”
Thörnberg said the Bulls’ victory was a team effort.
“It feels like we’re all from here, whether you’re an American, a Canadian, a Finn, or born here in Jönköping,” he said. “We all worked hard for each other.”
HV71 went into the finals as the favorite to win the final, the Bulls finished second in the regular season while Brynäs was fifth, but only five points separated the teams and they had the same amount of regulation-time wins. In the post-season, HV71 advanced to the finals by sweeping Färjestad in the first round, and dropping only one game to Malmö in the second round while Brynäs had to play six games with Linköping and then go the distance in its semi-final series against Frölunda, the 2016 champions.
Brynäs had its chances to win the club’s 14th championship. Three of the games in the final series went into overtime, with Brynäs winning two of them. The Tigers also had a 3-2 lead in the series going home for Game 6.
HV71 had to overcome a series of injuries and rode the goaltending of Söderström to the gold medal. Söderström played all 16 playoff games and finished with a 2.11 goals against average.