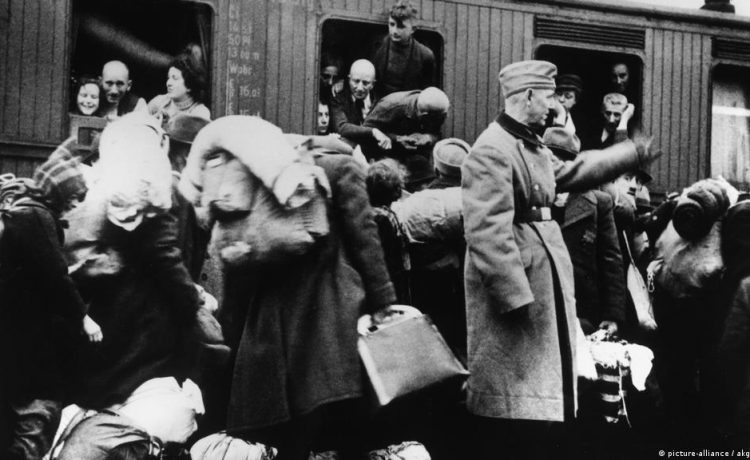 The first so-called “East Transport” left Berlin on October 18, 1941 with 1,089 Jewish men, women and children on board. Their final destination was the Lodz ghetto in Poland.

Steinmeier acknowledged the historical burden of past crimes: “We Germans still bear the guilt that perpetrators, their assistants and those who aided the organized murder of European Jews brought upon themselves,” he said. “We still feel shame over the fact that fellow citizens were taken from the heart of society, cheated, deprived of their rights, dispossessed and ultimately sent on a journey to their deaths.”

Speaking of the “unfathomable, gruesome events” that took place at the time, the president pointed out that the most unsettling aspect of them was the fact that they took place in plain sight. “The crimes were committed for all to see, separation and deportation happened at the heart of German everyday life, that is the horrible truth,” he said.

Remembering the deportation of Berlin’s Jews

Steinmeier calls for Germans to stand up to antisemitism

He warned that “antisemitism can never again have a place in our society,” yet bemoaned that it apparently does, noting that Jews in Germany today are “repeatedly subjected to ever-harsher antisemitic hate speech and antisemitic attacks.”

He encouraged all who see such crimes to take a stand against them: “Never again can antisemitic thought and action go publicly unchecked.” Steinmeier said that “many went along,” with the crimes of the past, adding “many abetted those crimes and many profited from them.”

Mayor Müller used the Monday event as an opportunity to call for keeping the memory of the Holocaust and the crimes of Germany’s Nazi past alive in order to protect democracy from the rising threat of right-wing extremism today.

“Freedom, tolerance and democracy are not givens, but rather must be defended,” Müller said

The Track 17 Memorial at Berlin’s Grunewald Train Station was dedicated by German rail operator Deutsche Bahn in 1998 as a reminder of the role the former Deutsche Reichsbahn played in initiating deportation transports of European Jews to ghettos, labor and death camps from 1941-1945.

By spring 1942, some 10,000 German Jews had been deported from Grunewald; most were eventually murdered. In all, an estimated 50,000 Berlin Jews were deported — 30,000 from the Moabit industrial rail yard and another 10,000 from the Anhalt Station.

Like other countries around the globe, Germany has seen a shocking rise in the number of antisemitic crimes registered in recent years, the most violent of which was the unsuccessful October 9, 2019, armed attacked on a synagogue in Halle, in which two people were killed and two more injured.