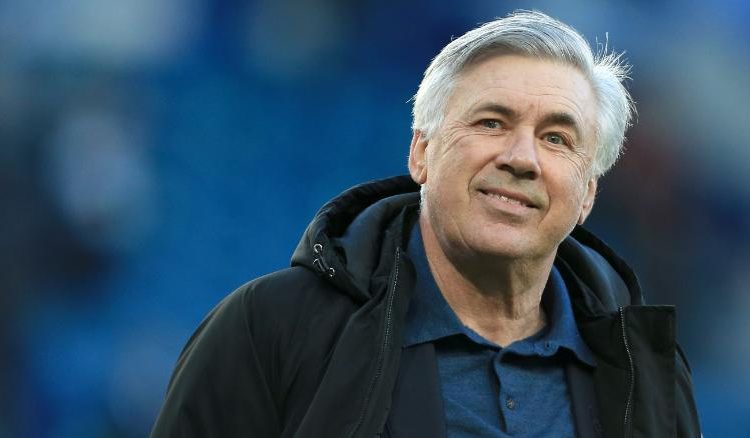 LIVERPOOL, ENGLAND - MAY 19: Everton manager Carlo Ancelotti smiles after the Premier League match between Everton and Wolverhampton Wanderers at Goodison Park on May 19, 2021 in Liverpool, United Kingdom. A limited number of fans will be allowed into Premier League stadiums as Coronavirus restrictions begin to ease in the UK following the COVID-19 pandemic. (Photo by Simon Stacpoole/Offside/Offside via Getty Images)

Carlo Ancelotti has returned to Real Madrid to become the club’s new manager for the second time in his career.

He succeeds Zinedine Zidane at the helm of the club, after the former Real player left as manager for the second time last week.
Ancelotti previously managed Real Madrid for two years between 2013 and 2015, winning the Champions League and the Spanish Cup during the stint.
“Real Madrid communicates that Carlo Ancelotti will be the new first team manager for the next three seasons,” the club said in a statement. “Tomorrow, there will be the official signing ceremony together with the President Florentino Perez in the Real Madrid City.”
The Italian manager leaves his position as manager at Premier League side Everton to rejoin the Spanish giants. After the news of his departure broke, he took to Twitter to thank the club.
“I would like to thank Everton FC, my players and the supporters for giving me the opportunity to manage this fantastic and historical club,” he said. “I decided to leave as I have a new challenge with a team that was always in my heart, Real Madrid.
“I leave taking with me all the amazing moments we have experienced together and wish the Club and fans all the best.”
A former Italy international player, Ancelotti has consistently been a trophy winner during his illustrious playing and management career and is one of only three managers to win three Champions Leagues.
The 61-year-old has previously managed European superpowers AC Milan, Chelsea, Paris Saint-Germain and Bayern Munich, winning trophies at all those clubs.
During his time in Madrid with Real, he helped the club to its long-awaited 10th Champions League title in 2014, beating city-rivals Atletico in the final.
He left just a year later, but returns in 2021 on a three-year deal after Real’s first season in 11 years without lifting a trophy.
“I have complete respect for everyone associated with Everton and hope they can achieve the exciting opportunities they have in front of them,” Ancelotti said in a statement on the Everton website.
“While I have enjoyed being at Everton I have been presented with an unexpected opportunity which I believe is the right move for me and my family at this time.”
It leaves Everton searching for its sixth permanent manager in five years.
Read from source: https://edition.cnn.com/2021/06/01/football/carlo-ancelotti-real-madrid-manager-everton-spt-intl/index.html
Share on FacebookShare on Twitter
Malmo Express NewsJune 4, 2021