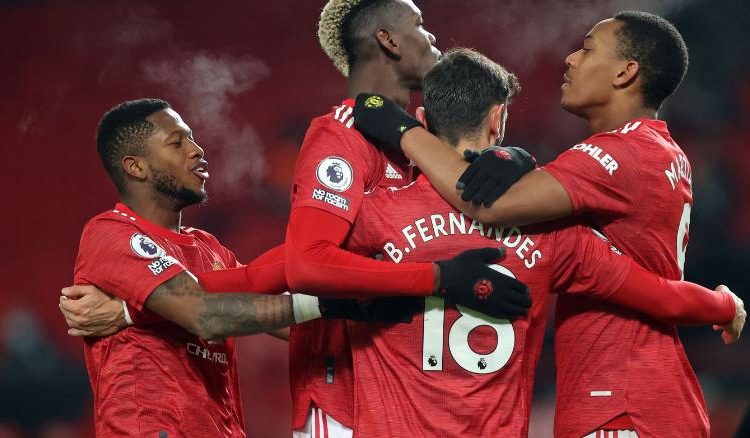 Manchester United drew level with archrival Liverpool on points at the top of the English Premier League as a sweetly struck Bruno Fernandes penalty secured a 2-1 victory over Aston Villa at Old Trafford.

Fernandes’ 15th goal of the season settled a high-quality New Year’s Day encounter after Bertrand Traore had canceled out Anthony Martial’s first-half opener for the home side.
Liverpool still lead United on goal difference, but after a stuttering start to the season, Ole Gunnar Solskjær’s team has been on an impressive run in the league.
A third straight home win and seven wins in the last nine has seen United charge up the league to occupy its highest position at the turn of the year since the last season of Alex Ferguson’s reign as manager in 2012-13, when the English title was last won by the Red Devils.
Solskjær was delighted with the victory but has been playing down his team’s title chances.
“It’s early in the season and we shouldn’t get too carried away with three points,” he told Sky Sports.
“We have improved and we are getting better in the league and the season is going to be tight so we just to keep working and improving as a team.”
With Jack Grealish pulling the strings, Villa, so close to being relegated last season, is a team transformed in this campaign. It took a brilliant Eric Bailly block to deny substitute Keinan Davis at the death to preserve United’s lead.
Villa stays in sixth place, seven points adrift of the leaders, but with a game in hand.
Villa manager Dean Smith was unhappy with his side’s performance in the first half which saw United push the pace with Martial, Fernandes and Paul Pogba all having good efforts before Martial put the home side ahead just before halftime.
Pogba and Marcus Rashford combined in midfield to send away Aaron Wan-Bissaka whose cross was headed home at the near post by the Frenchman, his first goal from open play this season.
John McGinn’s strike was the closest Villa came to scoring in the first half but the visitor was the first to strike in the second as a quick free kick found Grealish to cross for Bertrand Traore to neatly control and fire home.
The sides were level for just three minutes when Pogba wriggled his way into the box and Douglas Luiz tripped him with the lightest of touches from behind.
Referee Michael Oliver pointed to the spot but it took a further video assistant referee check for the penalty to be confirmed.
Smith said after the match he believed it was the wrong decision, but Fernandes made no mistake with the penalty past Villa keeper Emiliano Martinez, his 11th goal in the league this campaign.
As the match opened up, Pogba could not convert from close range, Fernandes had a shot tipped onto the crossbar and Rashford blazed just over from the subsequent corner.
Villa also threatened and Tyrone Mings headed just wide from a Grealish free kick while Anwar El Ghazi was denied by a last-ditch stretched clearance from Wan-Bissaka.
Bailly’s heroics saw him surrounded by teammates at the end before the final whistle blew with United holding on to three precious points.

Earlier, West Ham put an end to Everton’s recent fine run with a 1-0 win at Goodison Park thanks to a late goal from Tomas Soucek.
He followed up a deflected Aaron Cresswell shot to score his fifth of the season in the 86th minute, guiding his shot past Jordan Pickford.
Goalscoring opportunities at Goodison were few and far between with only one shot on target in the first half while the second half offered little more in terms of entertainment.
The best chance fell to West Ham’s Pablo Fornals, but he headed weakly wide from a good position.
Colombia’s James Rodriguez came on as a second-half substitute after an injury layoff, but was unable to spark a home revival before the Hammers made the late breakthrough.
West Ham boss David Moyes was claiming his first win against the team he formerly managed, while Carlo Ancelotti’s Everton stay in fourth, four points off the top.
“A really good, professional job,” said Moyes, praising his team for finishing a run of three games in six games so strongly.

Meanwhile, the ongoing Covid-19 crisis could impact on Sunday’s fixtures with Manchester City manager Pep Guardiola revealing that he will be without five players for the planned key clash with Chelsea.
City said on Christmas Day that there were four positive cases at the club, including Kyle Walker and Gabriel Jesus, causing Monday’s match with Everton to be postponed at short notice.
Further testing has thrown up more positive cases, including three more squad members whose identity has not been revealed.
Fulham’s match at fellow strugglers Burnley is also in doubt with the results of further testing of its squad awaited.
Its London derby on Wednesday against Tottenham Hotspur was called off at short notice, a decision labeled as “unprofessional” by Spurs boss Jose Mourinho as he prepared his side for a home game against Leeds United on Saturday.
The Premier League has faced calls for a “circuit break” with a rise in positive tests but has so far insisted the season must progress as planned.
Read from source: https://edition.cnn.com/2021/01/01/football/premier-league-manchester-utd-aston-villa-covid-spt-intl/index.html
Share on FacebookShare on Twitter
Malmo Express NewsJanuary 1, 2021