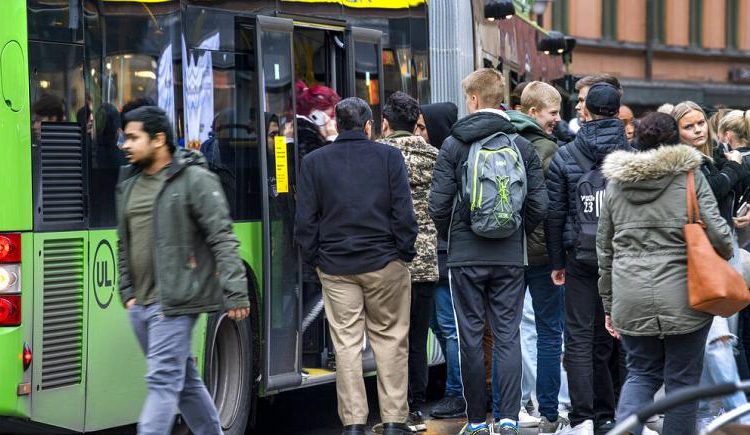 Sweden has told citizens for the first time to start wearing masks on public transport to stem the spread of coronavirus.

The recommendations, announced on Friday, stipulate that Swedes should be wearing face coverings at peak times when “congestion cannot be avoided” – an apparent turnaround from the country’s criticised approach to the pandemic.

Prime Minister Stefan Löfven said other restrictions would also be coming into force, such as halving the number of people who can eat together in a restaurant and bringing forward a curfew on alcohol sales.

Previously, eight people could dine together, but this will be cut to four, while alcohol sales will be banned after 8pm.

The latter will come into effect on Christmas Eve, the day Swedes usually exchange their gifts.

Also announced were further restrictions on people entering shopping centres and gyms, and non-essential workers have been urged to stay at home.

Sweden has been heavily criticised around the world for what many have viewed as a relaxed response to COVID-19. When the rest of Europe began enacting lockdowns earlier in this year, the Scandinavian nation persevered, keeping bars and restaurants open and avoiding other tough restrictions.

This strategy, however, appears to be demonstrating its frightening flaws as the Swedish healthcare sector starts to buckle under the strain of the second wave.

Just this week, the Stockholm region called for private medical workers to stand-in for staff shortages after reporting that 99% of its intensive care beds were full. All non-urgent operations at a local children’s hospital were also cancelled to divert energy to emergency care.

This prompted officials from neighbouring countries Norway and Finland – which have not been affected as badly – to say they were prepared to offer medical assistance.

“I think we have failed,” he said, when looking back on the year. “We have a large number of people who have died and that is terrible. It is something we all suffer with […]

“The Swedish people have suffered enormously in difficult conditions.”

In response, Löfven agreed, adding: “Of course the fact that so many have died can’t be considered as anything other than a failure.”