Coronavirus: How Europeans are preparing for Christmas and New Year 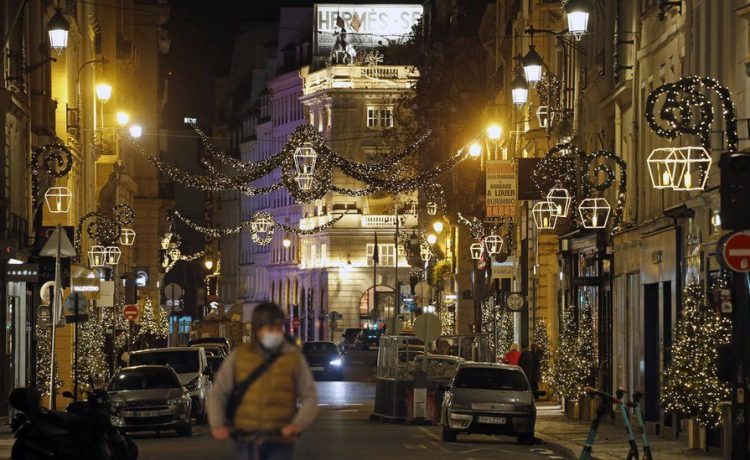 With Christmas fast approaching, governments around Europe are having to make tough decisions on whether to ease coronavirus restrictions in time for the holiday period.

Here’s a breakdown of what’s been announced so far.

Prime Minister Mark Rutte says the country will go into a strict lockdown for five weeks, from 15 December to 19 January.

Non-essential shops, cinemas, hairdressers and gyms closed on Tuesday and schools were to follow on Wednesday. Citizens have been told to refrain from booking non-essential travel abroad until mid-March.

Restrictions will be eased slightly for the three days of Christmas, when Dutch households are allowed three instead of two guests, not counting children under 13.

Mr Rutte delivered his address as protesters could be heard whistling and shouting outside his office.

“We need to bite this very sour apple before things get better. And yes they will get better. There will come a time when coronavirus will be behind us, when our lives will be normal again,” he said.

The announcement comes amid concern at the surge in infections in the country, recently seeing some 10,000 infections recorded in a single day.

Over the weekend a number of Dutch cities asked people to stay away as photos showed stores packed with Christmas shoppers.

A brief window of special restrictions has been introduced across the UK to allow people to celebrate Christmas.

Between 23 and 27 December (or 22 to 28 December in Northern Ireland) there will be no travel restrictions and people will be able to mix indoors and stay overnight.

The number of people who can mix is limited, however. So-called “Christmas bubbles” can include a maximum of three households in most of the UK or up to eight people in Scotland.

These bubbles, which can also meet in places of worship and outdoor public spaces, are fixed throughout the festive period. This means people cannot mix with two households on Christmas Day and two different ones on Boxing Day, for example.

However health experts have urged people to think carefully about who they mix with.

It comes as the capital London and some surrounding areas will move to top tier 3 level of rules following a rise in cases and the identification of a new variant of the coronavirus.

From 16 December, pubs and restaurants will close except for delivery and takeaway and most indoor entertainment venues as well as sports stadiums will also shut.

Italy: No Christmas markets and a nationwide curfew

Italy is currently seeing the highest number of deaths since the end of March and Prime Minister Giuseppe Conte has told Italians to expect a “more sober Christmas, without Christmas Eve gatherings, hugs and kisses”.

Many Italian regions are under partial lockdown and a ban on travel between different regions from 21 December to 6 January has been announced.

On top of the regional travel bans, people will not be allowed to leave their home towns on Christmas Day, Boxing Day and New Year’s Day. There will be exceptions for work, medical reasons or emergencies.

Churches are free to remain open, but the curfew means the traditional midnight Mass is unlikely to happen. The beloved Italian Christmas market, meanwhile, has already been banned.

“We think we need to introduce greater precautions to prevent a surge in infections,” Mr Conte said.

But it is not all bad news: Mr Conte has reassured children that Babbo Natale (Father Christmas) will definitely be visiting as he is exempt from global travel restrictions. Phew.

Many Europeans head to the ski slopes over Christmas, but the continent is divided over whether to keep the resorts open.

Italian Prime Minister Conte has warned against these traditional breaks. “We cannot afford it,” he said. He is one of several EU leaders, including German Chancellor Angela Merkel and French President Emmanuel Macron, who have tried to co-ordinate a Europe-wide deal to postpone the ski season.

All three countries have closed their ski lifts over Christmas.

These widespread closures mean popular resorts in the Alps and Dolomites will lose out on billions of euros in revenue. Tourism officials were quick to criticise the plan, with the president of one French tourism body asking: “So 400 people on a Paris metro won’t get infected, but four people on a ski lift will?”

Austria believes it can offer safe holidays once restrictions are eased and skiing will be allowed there from 24 December, although quarantine rules could mean it’s mainly domestic – especially as hotels will not be open. Swiss resorts have been told they are free to stay open with safety measures in place.

Some fear that – without consensus – holidaymakers will travel long distances to visit the open resorts. In France, there will be random border checks to prevent holidaymakers going to ski in neighbouring countries such as Switzerland.

France on 15 December lifted a lockdown imposed on 28 November, but strict measures are still in place as infections are still high.

Restrictions that meant any trip outside the home had to be made for a valid reason, certificated on paper or a smartphone, have also been lifted.

Instead there will be a nationwide curfew from 20:00 to 06:00, which will be lifted on Christmas Eve but not on New Year’s Eve. Theatres and cinemas will remain shut as will bars and restaurants.

The decision to keep France’s hugely popular ski resorts shut has come as a huge disappointment, with local mayors complaining of months of work wiped out. Mr Macron said they could reopen in January “under favourable conditions”.

Germany will enter a hard lockdown over the Christmas period, as the number of deaths and infections from the virus has surged in recent weeks.

Non-essential shops and schools will close nationwide during the lockdown, which will last from 16 December to 10 January.

A maximum of five people from no more than two households are currently allowed to gather in a home. But this limit will be relaxed from 24 to 26 December, when one household will be able to host a maximum of four close family members from other households.

Children aged under 14 are not included in this limit.

Under the national lockdown, essential shops, such as those selling food, will stay open, as can banks. Outlets selling Christmas trees can also continue trading. Hair salons are among the businesses which must close.

Most major Christmas markets in Germany have already been cancelled. As for New Year, fireworks displays have been cancelled while letting them off in the street is likely to be discouraged.

The Spanish government has approved a set of rules for the period between 23 December and 6 January. Regional governments, however, have the power to toughen these common rules if they deem it necessary.

During this window, travel between regions will be allowed providing people are visiting friends and family.

Social gatherings on Christmas Eve, Christmas Day, New Year’s Eve and New Year’s Day will be limited to 10 people. And unlike many European countries, this limit does include children.

The current curfew will also be extended to 01:30 on Christmas Eve and New Year’s Eve.

Spanish families traditionally celebrate the Feast of the Three Kings with a parade on 5 January, but the government has recommended that celebrations do not take place.

Austria came out of its second national lockdown on 7 December and restrictions were then eased ahead of Christmas.

The hours of a nationwide curfew were reduced to 20:00 and 06:00, while non-essential shops and other businesses reopened.

Restaurants and bars, however, will remain closed over the festive period for everything but takeaway. The country’s traditional Christmas markets will also be closed.

Hotels, meanwhile, are only open to those travelling on business. People visiting from countries with more than 100 cases per 100,000 – which include Germany and Italy – will have to quarantine for 10 days.

The government ordered at least seven million antigen tests, and voluntary mass testing has been rolled out nationwide.

But over the past two decades there has been an increase in celebrations of Christmas, which the country’s Orthodox Christian majority marks on 7 January.

Even so, restrictions are likely to dampen celebrations across the holiday period.

In the capital, Moscow, officials announced new measures that will last until 15 January. These include early closing times for restaurants and cafes and a 25% capacity limit at cinemas and theatres. Residents over the age of 65 and those in high-risk groups must also self-isolate until this date.

Other regions have introduced similar restrictions of their own.

It comes after health officials warned that the situation remains unstable and the epidemic has not peaked yet nationwide. Virus cases have surged in recent weeks, and a record daily tally was recorded on 26 November.