How are European countries planning to vaccinate their citizens? 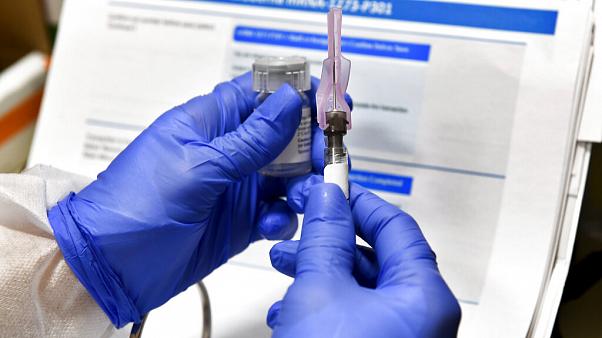 How do you vaccinate more than 7 billion people against COVID-19? That’s the challenge facing public health officials around the world.

Regulators in the UK are the only internationally-recognised body to have approved public use of a vaccine. But other nations are already working on strategies for when their own authorities give the green light – not least deciding who will be first in line for the jab.

France plans to start its first phase of roll-outs in January, with nursing home residents and high-risk care workers at the front of the queue for the initial million vaccines, according to Prime Minister Jean Castex.

The second phase, beginning in February, will “enlarge the perimeter” to the 14 million citizens most at-risk to the disease due to age and health conditions.

Some health professionals will also be included in this phase of distribution.

By spring, vaccinations will be rolled out to the entire population under the third phase of the strategy.

Portugal is also planning to follow a similar route to France by prioritising 400,000 of its most vulnerable citizens for the vaccine from January. The country plans to have vaccinated 1 million people by April.

Prime Minister Antonio Costa said the plan would be guided by four fundamental principles: That it is “universal for everyone”, that it is optional, free, and “distributed to the whole population according to the technical and scientifically defined priority criteria”.

UK to roll out the vaccine ‘from Tuesday’

The UK has started receiving doses of the Pfizer/BioNTech vaccine after it was approved by regulators last week.

It is now expected to be administered to the population from Tuesday.

Chris Hopson, the chief executive of NHS Providers, said the 800,000 doses being sent over would be prioritised for people in care homes, the staff at these facilities and people over the age of 80, as well as other at-risk NHS staff.

‘Let’s not fool ourselves’ that a vaccine is enough

But despite this European optimism, the United Nations has warned a vaccine will not be enough to undo the damage already done by the pandemic.

“Vaccines may become available within the next weeks and months,” UN Secretary-General Antonio Guterres said, adding: “But let’s not fool ourselves. A vaccine cannot undo the damage that will stretch across years, even decades, to come.”

The UN chief then pointed to rising poverty, the threat of famine and the “biggest global recession in eight decades”, something he stressed is not due to coronavirus alone.

“Nearly a year into the pandemic, we face a human tragedy and a public health, humanitarian and development emergency,” he added.

Guterres has since been urging the world’s richest nations to back the World Health Organisation’s ACT-Accelerator to help distribute vaccines to the world’s poorest populations.

Macron, who said $10bn (€8.2bn) had so far been raised, also reiterated a proposal for “a donation mechanism” to ensure vaccinations are given to priority groups in developing countries.

EU chief Charles Michel, meanwhile, has floated the idea of an international treaty to help the WHO deal with any future pandemics.

This would be used to monitor infectious diseases in animals, to improve access to healthcare, and to address financing issues.

“The principle of universal access to the new COVID-19 vaccines is fundamental. Our aim must be to guarantee access to vaccines, treatment and tests for future pandemics. This should be laid down in a treaty,” he said.