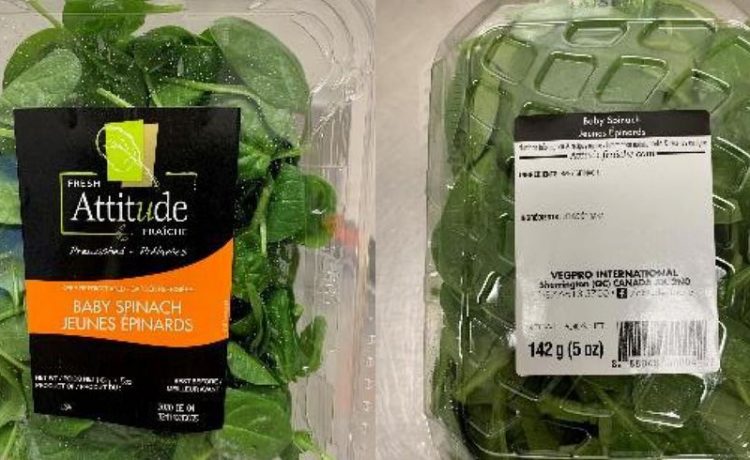 The U.S. Food and Drug Administration announced this past week that Vegpro International has issued a recall on Fresh Attitude baby spinach over fears that it could contain salmonella.

The recall, which was issued on November 27, affects five-ounce and 11-ounce packages of the spinach with “best before” dates of December 4 and 5 for the five-ounce and December 4 for the 11-ounce containers. These products were made in the company’s Eastern Canadian plant, so they have been distributed only in Eastern Canada and the Northeastern United States, which the FDA identifies as New York, New Jersey, Delaware, Connecticut, Maryland, and Pennsylvania only. Products in all other U.S. states were produced in a different facility located in Florida and are not affected by this recall. You can find additional UPC numbers and other identifying information about the affected product on the recall page here.

No illnesses have been reported in relation to this recall. If a product involved in this recall is still in your possession, you should return it to your place of purchase for a full refund. You can also contact Vegpro at 1-877-613-5700 or at http://vegpro.com/contact/ for more information surrounding the recall.

Salmonella can cause serious infections and can sometimes be fatal to young children, older people, and people with weakened immune systems. Others who are infected with salmonella can experience fever, diarrhea, nausea, vomiting and abdominal pain, according to the FDA notice.