‘Call of Duty’ writer: Video game takes place in the past, but questioning of truth rings of today 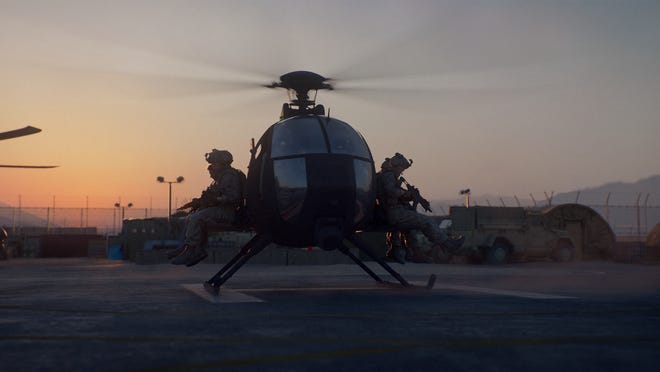 David Goyer is a master of multimedia.

Goyer took time recently to discuss “Call of Duty: Black Ops Cold War,” the latest entry in the multibillion-selling first-person franchise from the set of “Foundation,” the Apple TV+ series based on the books by the late Isaac Asimov on which he is a writer and executive producer.

Despite the effects of the coronavirus pandemic, the game’s developers at Treyarch and Raven Software opted not to add any hint of the crisis into the game, says Goyer, who was a writer and story consultant on  “Call of Duty: Black Ops Cold War,” out now, for PlayStation 4, PS5, Xbox One, Xbox Series X and S, and PCs on Battle.net (rated Mature for ages 17-up)

“People have asked me on ‘Foundation,’ are you going to weave the idea of COVID into the show even though that show takes place in the future,” Goyer said. “For me personally, as a creator, I always find that a little irrelevant. I like to keep the intent of the story and the concept pure, especially when you put years into something and not try to pivot on something that is happening historically because it may or may not be relevant a year or two years from now.”

That same strategy prevailed on the latest Call of Duty game, he says. “We didn’t adjust to anything that was happening in current events. It was really about let’s go back most specifically to that first game and what was it about that game that made the experience so fun? It was Woods, Mason, Hudson, paranoia, deniable operations. It was weaving in real covert missions.”

The legacy of ‘Call of Duty: Black Ops’

Released in 2010, “Call of Duty: Black Ops,” is one of the top-selling video games of all time. Players took the role of CIA operative Alex Mason, who apparently has been brainwashed by the Russians. Together with Master Sergeant Frank Woods and CIA agent Jason Hudson, he sees action in Cold War situations in Cuba, Russia and Vietnam.

In the new game, “the player is the hero,” Goyer said. “The player is absolutely the protagonist. You are yourself or whatever character you created. And you are interacting with Woods and Mason.”

Q: So in this new game, you have a hand in creating your character?

Goyer: That was what was interesting. The player has the ability to create their own character and to sort of imbue that character in the game with either their own personal attributes or whatever attributes they wanted to do. (The game) doesn’t presume you’re character is a man (or) a woman. It could be gender non-binary. And the story within the game and the gameplay, to a certain extent, adapts to accommodate for that. That’s what was really exciting.

Q: Tell us some more about the premise of “Call of Duty: Black Ops Cold War.”

Goyer: To a certain extent, it is more of a direct sequel to the original Black Ops game. It kind of nests within the two, it doesn’t necessarily invalidate the other. When I met with Treyarch and Raven, they wanted to do a return to form. So if you think about what makes Black Ops Black Ops, it’s the idea that everyone has their own version of the truth. There are deniable missions and things like that.

It’s an attempt to recapture that but, at the same time, push it in a different direction. One of things that was most exciting to me when I first joined the Black Ops franchise was the fact we were weaving in real history, real historical black ops operations … giving it what James Cameron called the veneer of authenticity. We have got (former President Ronald) Reagan in this one and (Secretary of State) Alexander Haig in this one. Obviously, it’s a fiction and I can’t give away too many plot points, but much of the game also spins off some very real historical operations that only because of things being declassified the general public knows about now.”

Q: The idea of ‘What is reality?’ certainly seems timely.

Goyer: Everything old is new again. Obviously, Treyarch has been working on this for a long time, and I have been working on it for a long time, as well. Everything that is happening right now makes it even more relevant. It’s just funny how a lot of old enemies that were once thought trite have sort of come back to bite us in the ass. I think one of the other things that is the hallmark of Black Ops games is paranoia. You just look at where we are in the world right now, and everybody is paranoid about everything. Everybody is debating what is truth and what is reality – it’s playing out today.

Q: You have worked on two previous Black Ops games. What is it like coming back?

Goyer: It’s fun. By the time I did the second game, I had learned a lot. You can’t necessarily communicate information in a video game the same way you can in film or in television, especially if you are dealing with branching narratives. That’s a whole different ball of wax. It gave me a leg up when I was doing the Star Wars VR project having worked on the video games. Having done two Star Wars VR projects in the interim and then coming back to video games, I had a much better understanding of what was possible and what wasn’t possible. Different ways to communicate exposition. A much better understanding of what it means when you as a player or you as a VR user are part of the story or driving the story.

Q: What would you say about media and the strength of video games now.

Goyer: Media has been changing since the advent of the printing press. It’s always changing it’s always evolving, the way that we consume story. There was radio, then film, then television, then there were computers, and then there were video games, and now there’s VR, and now there’s streaming where you can watch things on-demand. It is obvious that the pandemic has hastened that change and tilted the balance to video games and streaming. Even the concept of what a blockbuster is has changed. You can have a blockbuster video game or streaming show and do it from the comfort of your own home, no matter how scary the world outside is. Stories are constantly evolving, and it’s perilous to say stories should always be consumed one way. Fifty years from now, stories are going to be consumed differently from the way we do now. Those who cling to the past to a certain extent might find themselves left behind.

I think about what I’ve been experiencing during COVID. I’ve been playing a hell of a lot of video games with my kids and I’ve been watching a lot of streaming shows, and they excite me. And it’s good to escape into those stories.
Read from source: https://www.usatoday.com/story/tech/gaming/2020/11/21/call-of-duty-black-ops-writer-playstation-xbox-pc/6363334002/
Share on FacebookShare on Twitter
Malmo Express NewsNovember 23, 2020