Macron follows a well-worn path of French presidents, by veering to the right 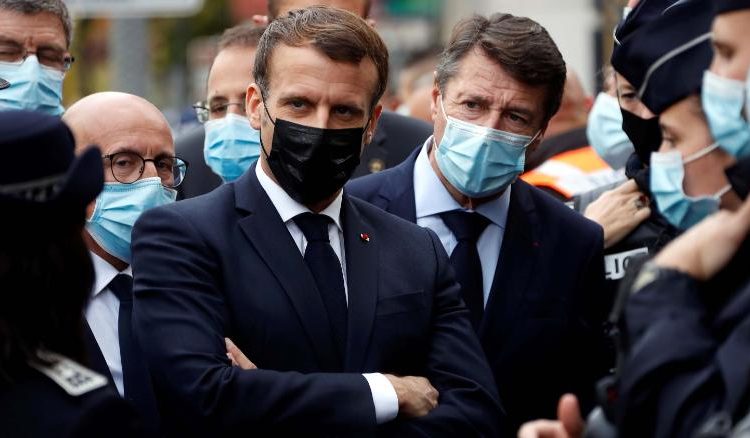 French President Emmanuel Macron (2nd-L), Right-wing party Les Republicains (LR) MP Eric Ciotti (1st-L) and Nice Mayor Christian Estrosi (3rd-L) visit the scene of a knife attack at the Basilica of Notre-Dame de Nice in Nice on October 29, 2020. - France's national anti-terror prosecutors said Thursday they have opened a murder inquiry after a man killed three people at a basilica in central Nice and wounded several others. The city's mayor, Christian Estrosi, told journalists at the scene that the assailant, detained shortly afterwards by police, "kept repeating 'Allahu Akbar' (God is Greater) even while under medication." He added that President Emmanuel Macron would be arriving shortly in Nice. (Photo by ERIC GAILLARD / POOL / AFP) (Photo by ERIC GAILLARD/POOL/AFP via Getty Images)

When newly elected French President Emmanuel Macron triumphantly marched across the courtyard of the Palais du Louvre amid a sea of tricolor flags back in 2017, he promised to begin a new chapter in the country’s history. “I want it to be that of renewed hope and confidence,” he declared.

Macron had campaigned with the slogan, “neither left nor right.” But he now appears to be lurching in the latter direction. Two controversial bills, and increasingly inflammatory rhetoric coming from the Interior Ministry, are evidence of this.
With the presidential election just 17 months away, the 42-year-old risks losing support from many of the left-leaning voters who helped him win office in the first place.
Over the past three years, 43 MPs have either quit or been thrown out of Macron’s party, La République en Marche (LREM), created in 2016. Some of them had been experts drawn from civil society who had entered parliament keen to reshape the well-worn mold of traditional party politics. Some felt alienated by the government’s increasingly conservative line.
“We are not the ones doing the betraying. On the contrary, we believe we are returning to our original values,” Emilie Cariou told French radio after quitting LREM in May to start her own green parliamentary group.
Political analyst Dominique Moisi believes that since he came to power, Macron has been trying to satisfy voters on the right, rather than his leftist base.
“There is this evolution which explains the disarray of some of the members of the LREM who left the party because they felt he was moving too much in the direction of economic liberalism and security conservatism,” Moisi told CNN.
Macron’s conservative overtures regarding security were apparent when his party presented the “global security bill” in parliament. Article 24 of the bill would ban the dissemination of images of police officers with the “intent to cause them harm.”
If it becomes law, offenders would be subject to a maximum one-year prison term and a $54,000 fine.
Many fear the bill would make covering protests and police brutality more difficult for journalists. After widespread protests, and with journalists and human rights organizations decrying article 24, Macron’s government bowed to pressure and on Thursday, the Prime Minister’s office announced article 24 would be amended to ensure it did not “prejudice the legitimate interest of the public to be informed.”
During a debate Friday in Parliament, Interior Minister Gérald Darmanin addressed the criticism, saying journalists and members of the public “can continue to film and broadcast but you cannot give names and addresses of our police officers who want to serve the republic.”
But sharing images “intended to harm or incite violence would violate the law.
Parliament voted to approve the controversial article Friday. The entire global security bill faces a vote Tuesday before going to the Senate.

The draft legislation is one of two bills sparking public debate in France.
Next month Macron’s ministers will present legislation that the French President hopes will strengthen secular values and combat “Islamist separatism.”
In an October speech, Macron announced the new draft law would ban home schooling starting in September 2021, saying inspectors for the Education Authority frequently close illegal schools run by religious extremists. The proposed law would also target funding for mosques.
Secularism has taken center stage in France in the wake of the beheading of Samuel Paty, a school teacher who was killed by a Chechen teenager after he showed his pupils cartoons of the Prophet Mohammed during a class on freedom of expression.
Reacting to Macron’s proposals, Mohammed Moussaoui, the head of the French council for the Muslim faith, said he would support the fight against extremism.
But some activists and left-wing MPs condemned Macron’s speech.
“Macron did not speak of separatism and republican cohesion. He only spoke obsessively of Islam. Stigmatizing Muslims — that’s his only solution for trying to mask the catastrophic health and social crisis,” wrote Manon Aubry, an MP with far-left party La France Insoumise.
French human rights campaigner Yasser Louati tweeted that Macron had “emboldened the far right” with his speech.
Macron’s defense of the cartoons, which are considered blasphemous in Islam, sparked demonstrations and triggered boycotts of French products in Muslim-majority countries.
Moisi said Macron’s hardened stance on security and Islamic extremism was a direct response to the recent terror attacks that have blighted the country, and one that could help neutralize the rhetoric of the far-right.
“Macron is trying to answer the evolution of the situation which calls in his mind for more security, and he’s not letting the extreme right benefit from the rise in terrorist activities in France,” he told CNN.
An Elysee spokesperson denied to CNN that there had been shift to the right in government, insisting that the recent legislative proposals are simply designed to protect the population.

With the next presidential election less than a year and a half away, Macron’s biggest threat comes from Marine Le Pen’s far-right party, National Rally.
Along with the proposed legislation, Macron’s recent political appointments may also represent an effort to neutralize his opponent.
In his last reshuffle, the President picked a few conservative stalwarts, shifting the ideological balance of his cabinet. In the wake of the reshuffle, Jerome Fourqet with the Ifop polling firm told French radio Europe 1 that Macron had seen his electorate change over the past three years.
“A large number of people who voted for him — who were from the left — have gone because they see that he has shifted,” Fourqet said. “They have been replaced with electors who didn’t vote for him and who are from the right.”
Newly appointed Interior minister Gerald Darmanin delivers a speech on July 7 at the police headquarters of Les Mureaux, outside Paris, on his first official visit in the role.
Macron promoted Darmanin, a protégé of former President Nicolas Sarkozy, from budget minister to interior minister.
Darmanin faced criticism recently when he said in an interview with RMC/BFMTV that he was “shocked” by aisles dedicated to halal and kosher food in supermarkets because they undermined the secular values of France.
Those were not his first controversial comments. Back in July, Darmanin weighed in on the subject of violence in French society — when he said the “growing savageness of a part of society must be stopped.”
“Savageness” — meaning to become savage or to descend into savagery — is a loaded term in France that carries racist overtones and plays heavily into the far-right discourse.
Nearing the end of his tenure, Macron’s predecessor Francois Hollande tried to reassure the French, reeling from a series of brutal terror attacks, by proposing a highly controversial bill that aimed to strip dual nationals of their French citizenship if they were convicted of terrorism. The bill sent shockwaves through Hollande’s Socialist Party, prompting his justice minister to resign.
Hollande lost support and, faced with record low approval ratings, became the first French president not to seek re-election. This provided Macron with his opportunity.
Now, with Macron’s fledgling party already split and controversy surrounding his proposed legislation, the question is how much further to the right he is willing or able to go to keep that lead intact.
Read from source: https://edition.cnn.com/2020/11/22/europe/france-macron-veering-right-intl/index.html
Share on FacebookShare on Twitter
Malmo Express NewsNovember 22, 2020